The CLAUS organ of the church of Pontrieux 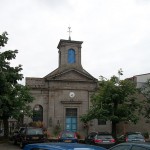 Building in neoclassical style completed in 1842 to replace a XVII century chapel that was fallling into decay. The architect was Mr Le Pescheur-Bertrand.

The foundation stone of the church was laid on July 29th 1840 and the completed building was blessed on October 30th 1842, Mr Le Borgne, vicar-general, attending the ceremony.

The church is situated on the Place Yves le Trocquer near the well-known fountain (XVII century).

The organ dates back to 1878 thanks to Reverend Riou, parish priest of Pontrieux since 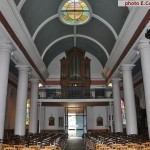 1876. Owing to his obstinate efforts and to the inhabitants’ good will, a 12-stop-organ was ordered from the Claus factory in Rennes. It was paid 15,000 francs and was installed on the new loft that had just been built by a company from Nantes, the case being attributed to Hérault from Rennes.

Jean-Baptiste Claus, who had worked with the well-known Cavaillé-Coll made the Grand orgue of Notre-Dame in Rennes in 1879 and, in the Côtes d’Armor, the organ of the basilica in Quintin (1880). The organ in Pontrieux, in a romantic style, has 6 stops for the GO, the same number for the Recit, that is to say 672 pipes 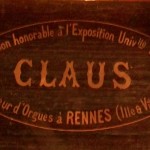 With the initiative of Reverend Malégeant and the Association of the friends of the organ created for that reason, the renovation to an identical state (except that a 16’emprunt ( ?) to the pedalboard was added) was made from 1992 to 1993 by the organ builder Jean-Pascal Villard Thénezay (79) for an amount of money of 300,000 francs. Perfectly adapted to the acoustics and the volume of the church, the organ has been finely harmonized by Mr Villard who is also in charge of its regular maintenance.

The console, made of oakwood is backwards. Slightly different from from the Cavaillé-Coll 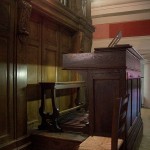 consoles or Debierre, the sides end at right angle , not in a cut-off.

Thanks to its two-octave-pedalboard slightly off-center to the right and its expression « cuiller » ( ?)- not really an « « expression pedal » yet, of really delicate use today for an organist, this small instrument with its poetic and forthright sounds is an irreplaceable witness of what a « country organ » could be during the romantic period, strong and made with dedication. 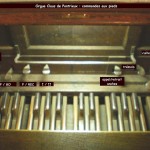 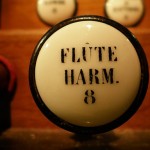 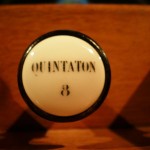 Protection of the instrument

Situation in the church

In the gallery down the main nave.

Excellent. Neither short nor too long echoes

Central heating in the church 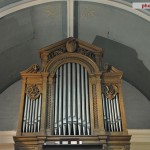 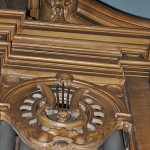 The notice about the history of the organ, down the gallery has been made by the AMIS DE L’ORGUE DE PONTRIEUX and MR Jean-Pascal VILLARD.

Organists (today and before)

– A few concerts with choir and organ

– A few films you can watch on youtube.com